What is the prediction for this year’s hurricane season?

Posted on June 6, 2016 by WeatherGuys Editor 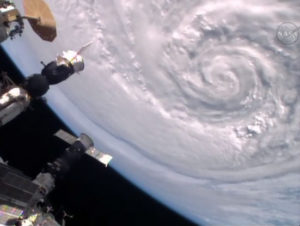 This photo, taken from video provided by NASA, shows Hurricane Alex — a rare January hurricane in the Atlantic — seen from the International Space Station. The National Oceanic and Atmospheric Administration (NOAA) is predicting 10-16 named storms this hurricane season, which runs from June through November in the Atlantic Ocean basin. (Photo credit: NASA)

Hurricane season in the Atlantic Ocean basin runs from June through November.

The National Oceanic and Atmospheric Administration (NOAA) is predicting 10 to 16 named storms this season.

To acquire a name, the storm must have wind speeds of 39 mph or higher. Of these, four to eight will turn into hurricanes; one to four of these storms are predicted to become major hurricanes with sustained winds of at least 111 miles per hour.

NOAA does not make a seasonal prediction on the path of hurricanes but will predict a hurricane’s path once the storm develops.

On average, the Atlantic Ocean sees 12 named storms, six hurricanes and three major hurricanes. So, if the forecast holds, we are in for an average hurricane season.

The last three years have seen weaker hurricane season, so this year may see high activity.

The forecast is also a function of the El Niño conditions in the Pacific Ocean. On average, El Niño years are low-hurricane years as during such years a strong jet stream exists over the subtropics, which can destroy the carefully organized circulation of hurricanes.

We are coming out of an El Niño year and there is a 70 percent chance entering a La Niña, a condition that favors more hurricane activity than average.

We already have had Hurricane Alex, which occurred in mid-January of this year. Hurricanes can exist outside of the defined hurricane season. Tropical Storm Bonnie was a weak but persistent tropical storm that formed on May 27.

Comments Off on What is the prediction for this year’s hurricane season?