What is the effect of snow cover on weather and climate? 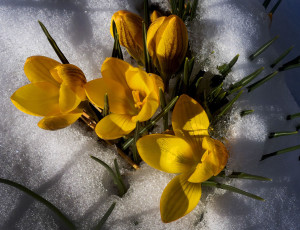 Snow surrounds spring crocuses in bloom. Even as a few flurries filled the sky on Friday, it is almost the end of the snow season for southern Wisconsin. (Photo credit: Gregory Shaver)

Snow is very good at reflecting incoming sunlight as anyone who has ever found themselves near a snow field on a sunny winter day can attest.

In fact, the percentage of incoming sunshine that is reflected, a fraction known as the albedo, is near or above 90 percent for a fresh snow cover. That means that 90 percent of that incoming sunshine, otherwise available to help warm the ground and then, in turn the air above the ground, is no longer able to warm the daytime.

Snow is also exceptionally good at emitting and absorbing longer wave, infrared radiation – the kind emitted by the Earth. Any layer of snow has two sides, a side that makes contact with the ground and another that faces the sky. For snow depths of just a few inches, the side facing the ground absorbs infrared from the surface of the Earth and prohibits that energy from reaching the top surface of the snow.

Meanwhile the top surface emits lots of infrared energy, which cools the air over the snow to very low temperatures. As a result of these two effects, the presence of snow cover lowers both the daytime high and the overnight low temperatures.

Recent research by a colleague of ours has shown that with both the arrival of snow in mid-November and the disappearance of it in late March, the temperature of the southern Prairie Provinces of Canada changes by about 18 degrees within a week. So, as snow loses its grip on the Northern Hemisphere, the warming we all expect from spring can come on quickly.

Comments Off on What is the effect of snow cover on weather and climate?