Will this mild November weather continue?

Posted on November 9, 2015 by WeatherGuys Editor 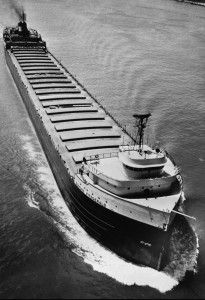 The Edmund Fitzgerald, a Great Lakes ore carrier, took on water and snapped in two during a storm on Nov. 10, 1975, on Lake Superior, plunging 556 to the lake bottom. Photo Credit: Burt Emanulle, Associated Press archives.

Not necessarily. Some warm Novembers had some severe extratropical cyclones, particularly around Veteran’s Day (formally known as Armistice Day).

Tuesday marks the 40th year since a winter storm blew across the Midwest, sending the freighter SS Edmund Fitzgerald to the bottom of Lake Superior with all 29 crew members. Gordon Lightfoot’s 1976 ballad “The Wreck of the Edmund Fitzgerald” helped make this incident the most famous disaster in Great Lakes shipping history.

The storm developed over the Oklahoma panhandle on the morning of Nov. 9, 1975, and headed for the Great Lakes, reaching Lake Superior by Nov. 10. The sustained winds of more that 40 knots resulted in waves larger than 20 feet.

This is also the 75th year after the Armistice Day storm of 1940, another memorable storm that ravaged the Upper Great Lakes region Nov. 11 and 12. This storm took down the Tacoma Narrows Bridge that spanned Puget Sound in the Pacific Northwest before heading to the Midwest. By the time this storm ended, it had killed more than 150 people, sunk at least three ships, stranded hundreds of train passengers, and isolated Midwestern towns with huge 20-foot snow drifts.

The “11-11-11” storm developed over southern Wyoming on the morning of Nov. 10, 1911 and traveled eastward reaching southwestern Iowa by the morning of the 11th. The storm’s center traveled northeastward across Wisconsin, reaching central Wisconsin by noon and Michigan’s Upper Peninsula by evening.

Comments Off on Will this mild November weather continue?