Why have the skies been so hazy? 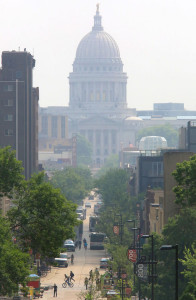 The state Capitol is enshrouded in haze July 7 as lingering smoke plumes from wildfires in Canada continue to move through the area.
Photo Credit: John Hart, Wisconsin State Journal

Summer skies often look hazy because of the high humidity, which condenses in the sky and forms small liquid water particles that scatter light, creating that hazy effect.

But there’s a different reason our skies have not been a nice blue color when they’re cloud-free: smoke.

It’s coming from wildfires in the forests of the Northwest Territories in Canada, which were started naturally by lightning strikes. The winds have moved this smoke our way, defining which areas would be affected by the smoke.

In early July, the winds transported the dense smoke south and southeast; the leading edge of the smoke made it as far south as Iowa and northern Illinois. While most of the smoke is high above ground, some smoke reached the ground.

Last week the smoke was so thick and widely spread that some could smell it, and triggered a poor air quality warning for southern Wisconsin. Surface visibility was reduced to 3-5 miles at some locations in North Dakota.

The smoke has made for some very red suns during sunset, particularly last Tuesday and Wednesday.

You may have noticed that if smoke is not too thick, it takes on a bluish tint. That is because the small smoke particles scatter blue colors in sunlight. Smoke above us will scatter the blue colors in all directions, eventually removing nearly all the blue light from sunlight. So, as you look at the sun as it begins to set, the smoke removes all the blue light from the sun’s rays heading toward your eyes, leaving the reds and oranges to transmit through the atmosphere. This makes the sun appear very red.

Comments Off on Why have the skies been so hazy?