How do raindrops form?

Posted on July 8, 2015 by WeatherGuys Editor 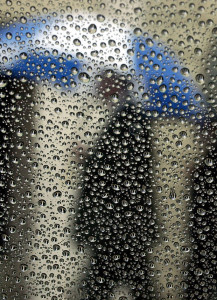 Raindrops form when microscopic water droplets bump into each other in clouds. The more turbulent the clouds, the bigger the raindrops get.

To explain how this process works, let’s consider water droplets in the upward-moving air of a cloud. Water droplets in clouds with different sizes move at different speeds, as gravity and vertical motions within the cloud act on the particles. The difference in speed increases the chance of collisions, just as the combination of fast trucks and slow cars increases the chance of collisions on a highway. Turbulent motions in the cloud can also cause the droplets to collide.

Aggregation is the process by which ice crystals collide and form a single larger ice particle. In the summer, the collections of crystals may form in the cloud but then melt as they fall to the ground, forming rain. When an ice crystal falls through a cloud, it may collide with and collect supercooled water droplets. This process is called accretion and is a mechanism to quickly form large particles.

Comments Off on How do raindrops form?