What are straight-line winds?

Posted on June 8, 2015 by WeatherGuys Editor 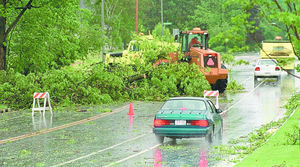 In May of 2000, authorities said straight-line winds uprooted trees as large as 5 feet in diameter. This tree that fell across Lacy Road near Richardson Road in Fitchburg was about 50 feet away from a home on Eugene Court that had its roof partially ripped off.

The lack of rotation, or spin, in these winds allows meteorologists to differentiate damage from tornadic winds. Tornadoes scatter objects all over because they rotate so quickly.

Straight-line winds can be hazardous as they can push over objects that can land on top of people, causing injury and death. In July 1999, straight-line winds blew down trees in forested areas of northwest Wisconsin. Many areas had wind speeds of greater than 60 mph, with some exceeding 100 mph.

Thunderstorms have upward air motions, called updrafts. These supply warm moist air to the storm and help to form the precipitation. There are also downdrafts, or sinking air in a storm. Such downdrafts carry air from high elevations in the atmosphere rapidly to the ground. Since wind speed is nearly always much faster at high elevations, the downdrafts carry very high momentum air to the surface, creating the straight-line winds.

Comments Off on What are straight-line winds?