Can large cities generate their own weather?

Posted on July 8, 2019 by WeatherGuys Editor

The “urban heat island effect” refers to the increased temperatures of urban areas compared with their rural surroundings.

The urban heat island is a well-documented example of inadvertent modification of climate by human activities. It is a classic example of how changing the energy balance of an area can affect the regional climate.

The urban heat island is evident in statistical analysis of surface air temperatures, and was first discovered in the early 1800s in London.

On average, a city is warmer than the countryside because of differences between the energy gains and losses of each region. A number of factors can contribute to the relative warmth of cities, such as heat from industrial activity, the thermal properties of buildings, and the evaporation of water.

Evaporation of water plays a role in defining the magnitude of the urban heat island. Solar energy absorbed near the ground in rural areas evaporates water from the vegetation and soil. Thus, heating in the rural areas is reduced to some degree by evaporative cooling during evapotranspiration. 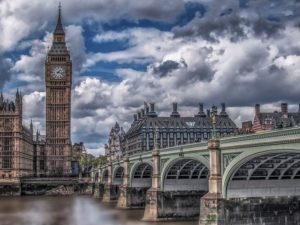 Megacities tend to have up to 10 percent more cloud cover than surrounding rural areas. (Photo: Pixabay)

A recent study of clouds over London and Paris using satellite data indicates that cities may be generating clouds. During the spring and summer, these megacities are persistently cloudier in the afternoon and evening than nearby rural areas. The authors suggest that the heat retained by buildings drives motions that lead to cloud formation.

Meteorologists have thought that regions downwind of large cities receive more than their expected share of rainfall; however, conclusive evidence has been hard to gather.

Comments Off on Can large cities generate their own weather?